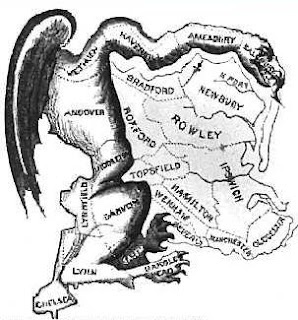 During the last round of redistricting they took Scranton out of the 10th Congressional District adding it to the 11th and split Luzerne County in half putting the back mountain in the 10th. Above Average Jane points out that Montgomery county has been chopped into pieces and the Pocono Record reports that Monroe county was diced into six state senate districts after the 2000 census. An Inky Columnist says one family has Joe Sestak as it's Congressman but if you live in the garage Jim Gerlach is your guy and a block away it's Allyson Schwartz's territory.

This is nuts, as a minimum districts should make geographic sense as much as possible. Sure, there will have to be nibbling at the corners to meet the population requirements but the computer modeled machinations of both parties has to end. The only way to end this is to take the power to draw district lines away from the legislature and give it to an independent commission like other states. But the catch is that it would require amending the Pennsylvania Constitution and the clock is running out.

Inky: On Monday, a strong reform, backed by Common Cause and the League of Women Voters, will be unveiled in Harrisburg as House Bill 2420. The clock is ticking on it already. Because the reform requires a constitutional amendment, the bill must achieve first passage this June to prevent another Keystone gerrymander in 2011. (New Jersey has a relatively sane system.)
This bill would ordain that districts should be compact and contiguous, should not split municipalities needlessly, and should preserve communities of interest. Importantly, the bill would bar the use of voter data to lock in political advantage through computer modeling.

Luzerne County 118th State Rep Mike Carroll is a co-sponsor of HB 2420. Thanks Mike, now convince Todd, Phyllis, Yuddy, Eddie Day and Karen to get behind this effort.
Posted by Gort at 1:31 AM

if the districts make geographic sense then these bastards wont keep winning. they'll never let it happen, and its a surprise that Mike Carroll is backing it...obviously political pandering--as he knows as well as anyone that something like this wont pass!

Mike Carroll must be pandering, since he has such strong opposition in the fall. Or was it the spring?