What we are famous for 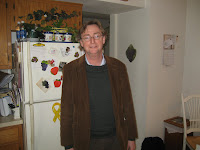 Yesterday I was interviewed by Tom-Jan Meeus who is the Washington correspondent for the Dutch newspaper NRC Handelsplad about the Ciavarella/Conahan scheme to lock up kids for cash. The Juvie Brothers. I'm not sure why people in Holland would be interested in this sordid affair but I'll talk with anyone about politics. He said this case fascinates him and he stumbled across this humble blog while researching the story.

He asked if I thought if any reforms would be made to our system of selecting Judges or if a debate was going on about the outsourcing of government functions that made this possible. I'm sorry to say I that don't see any structural reforms on the horizon. He wanted to know if I considered myself a cynic and I replied it's hard not to be but a better term would be that I'm a realist.

In a discussion with some friends we recounted what this area has been famous for over the years and the list is not good. The collapse of the coal industry, Hurricane Agnes, mass murderer George Banks, the Hugo Selenski escape and the kid that was living in someone's attic for a week were some of the things that came to mind.

Ironically, I had a discussion yesterday with a friend who is a lifelong NEPA resident like myself. And he thinks things still won't change. One of the reasons, he said, is that so many people run unopposed (among other reasons). And I thought that was pretty sad that he thought that. And then I realized, that's what I think, too. I do think NEPA'ers are being more watchful because of this. We have to maintain this heightened vigilance.

It is probably better to be famous than infamous even in Luzerne County.