Picking up where she left off in her first term as Prothonotary Carolee Medico Olenginski last week was complaining about the rug in her office.

Now she is upsetting the new found unity of the Luzerne County Republican Party saying the organization should not take credit for her election and wants her pictures removed from the new county GOP website. I lifted both of them from the site. She complains that some people couldn't attend the Michael Steele event because they didn't pony up $50 to join the Club GOP. “A lot of people agree with me...A lot of people who have been very active with the Republican Party couldn’t afford to go see Michael Steele that night,” Olenginski said. “To me, that’s wrong. If you’re trying to build a strong party, everyone should be welcome; if you’re trying to build something, you shouldn’t put up walls to keep people out.” She also is upset with the lack of financial support from the party. Controller-elect Walter Griffith said “Honestly, I don’t think the party has much money to hand out yet. But they did step up and helped me and Carolee, as well.”

Chairman Terry Casey pointed out “If she was unable to attend our functions, we always spoke on her behalf; we did what we could for her.” I can attest to that. She was a no show at the Operation HEART kickoff and Executive Director Renita Fennick sang her praises.
.
No word of what she thinks of the decor of the party HQ in W-B. It's going to be a fun 4 years. 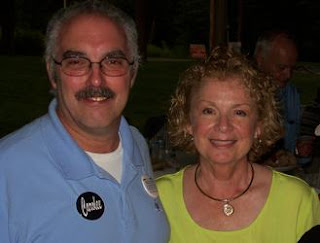 While I rarely ever talk about internal party politics, I will be writing a piece today that will set the record straight regarding Mrs. Olenginski.

I am very active in the county, state and national Rep. Parties and will let everyone know what is really going on today!!!

poor rentia fennick. these two grandstanders will ruin any chance the gop has at making inroads. t

From the Citizens Voice Griffith said. The big problem in the county is that either people are not qualified for their jobs


This guy really is not ready for prime time...... He just described himself as controller.

AT LEAST...she's not throwing kids in jail for cash or fixing underinsured motorist cases! At least I can give her credit for that!

So do we simply accept her as Mrs Mouth but not a crook? But is stealing taxpayer money any different from the taxpayer point of view than wasting it on office beautification?

Walter saying he is going to interview the employees to see if their qualified while he sits in the Controller's seat totally unqualified is laughable.

But,, this is what the voters want and what we have is a pair that can beat a full house. God save us all.

This is sad, so very sad. With all the problems facing Luzerne County taxpayers, this is what we have protecting our tax money. This is as bad as Commissioner Holy Sh***! Does anybody care about who is steering this ship of state? Maybe Walter and Carolle will do the right thing and just run away together or just run away.

There is only one guarantee with the election of Carolee and Walter...
Buyer's remorse

Funny Carolee did not have any problem posing for the pictures.

Gort, Call Renita and ask if the Local GOP Party ponied up the $5,000 they said they would put into the endorsed Canidates campaign. I will answer for her, NO!! Ask Nanda if he got the $5,000I can't blame Carolee for expressing her distaste. The said thing is that this was released to the press. Zen you could teach us all that you want about the Republican Party, put your name down as a canidate and see for yourself the backstabing that goes on. Also I would not claim to be an expert on Republican Politics in PA, the facts are not on your side.

Why would any rational individual want to pass himself off as an expert on Republican politics in PA? What a chilling thought.

anon 5:01, as I sit on the executive and finance committees of the county party, I'd say I have better than average information on what the party is doing. Nobody on either committee promised any candidate $5,000, endorsed or not. That is a complete fabrication from the faction of the party that Carolee belongs to. I wrote about them yesterday.

Also anon 5:01, what happened to Carolee's deal with Artie to be her deputy???

You poor souls just don't get it. There are local people that are the real Republican party and putting 10 or 20 thousand into the Party coffers would be chump change for them You don't get it. They don't give a shit for the rank and file or petty local politics.. They leave that for the grass roots people who think they are Republicans when in fact, they are the same as the laborer miners working for the wealthy owner/operators of the past. Will you people ever wake to the fact that Republicans want the cream and they don't want the common man to even get the drippings. Poor fools.

Anon 10:54 you hit the nail on the head! The big money people who are republicans could poor money into the local party and get real viable candidates, not the Walters and Carolees of the area.

Those so-called Republicans who keep crying class warfare should change their registration. And take Carolee with them. They sound like Democrats always complaining about the rich. She cries about people who can't afford to go but she never showed up to see all of those people who EARNED their club memberships with hard work and got to meet Michael Steele. I don't know why she complains about the rich. That's where she goes when she goes husband-hunting.

Zen, You really are a funny guy. You should have been a comedian. You are willing to state that you sit on the committees in public. That is a joke. Didn't your controller canidate donated to Jill Moran's campaign ( $250 to be excate Some republican)? Since you think you are the king of the party, have Terry Casey issue a letter for Gort to show, that he never said the rep party would pump $5000 into the endorsed canidates campaigns. I think you are smoking the same stuff like them all. For the record, more than half of the committee people in the republican party vote democrat. Just so you know, I am a committee person myself. People like yourself have ruin the party and electing people like Walter and Carloee without the help of the rep. party shows what we can do. Every event I went to was Hughes Signs and T-shirts. No Carolee or Walter. Well who won. Remember that Mr. Title Man!

So Anon 9:34, You're claiming victory for Walter and Carolle? OK, thanks, I was just wondering who needs a kick in the ass. Consider yourself kicked! By the way, how does you and your friends voting Democrat get Walter and Carolle elected? It obviously did get Hughes not elected. What the hell is it you're taking credit for?

Gort, you should be thrilled with Carolee, she gave your boy Bobby something to do.

I understand that the county is going through some tough times but I have to say that when you look at the courthouse the building is really something, and when you enter the rotunda is very nice, but he offices look like dumps. I have no problem with having decent looking offices to represent the people of this county. It is as if they are in a time capsul with the old paint jobs, poor carpet and flooring and very old furniture and storage. We should have some pride... And more computers would be great.

11:24, "More computers would be great". Great for what? Are they needed and if so for what? Petrilla wants to lay off more people so less will bwe needed. Do we buy more now or wait and see? Are the employees currently using pen and paper or do they have computers? Please tell me what you based that statement on. I'm not giving you a shot, I'm really curious about the state of equipment in the county.

i agree with an earlier poster, poor Renita. her efforts to build the republican party is like trying to build a university with recent grads of humpty dumpty college

The GOP of Southern Luzerne Co. got Carolee TV coverage on our local news stations, made introductions to her at our major events and worked the polls for her. We also put out signs for her. Carolee may be less likely to get our support in her next election given she has such selective memory loss as to all that was done for her by the GOP this election!

Well at least Walter is honest. He resigned from the home rule committee right after the election.