I have never been to Wisconsin 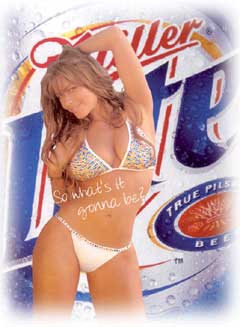 But I can't explain the hangover.


WEST BEND, Wis. (AP)- Authorities are hoping to break up what must be quite the party after beer thieves made off with almost $26,000 worth of suds from a delivery truck.
A semi trailer loaded with cans and bottles of Miller beer was stolen from a trucking company in Richfield, according to a Washington County Sheriff's Department report. The trailer was found four days later - sans beer - at an Oak Creek trucking firm.

They can ship directly to my address.

I can't believe this Commie Pig Blog! In our God's America when I surf the internet to get the political news from
so called legitemate bloggers I have to come across pornographic pictures! As luck would have it, my wife Thelma Jean came into the room just as I was on this site and she looked at that naked tramp advertising beer and nearly took her pie roller to my skull! Whatever happened to the good old days when porn was something you got in the alley way--no one was offended then! ANd it didn't advertise anything but what it was--porn! Not beer or toothpaste and on and on! My America was a lot more moral country when you got your skin rags and your whores in the back alley--not in strip clubs!! I saw on the tramps stomach the words SO what's it gonna be? Let me tell ya what it's gonna be--let the Homeland SEcurity dept. ship the Commie who runs this site straight down to guantanamo--where i'm sure the last thing on his mind will be beer or the smut he is promoting! God I hate all you Subversive commie loving liberals!!

The NSA already has on file on me and I look foward to a midnight plane ride. I think I will look good in an orange jumpsuit.

Gort, it was only a matter of time. Can you blog from a detention camp in Russia or another central Asian country?

Good question LV. Does the Gulag have WiFi? I understand they have many recreational activities. I'm fond of the beach and can't wait to try the waterboarding.