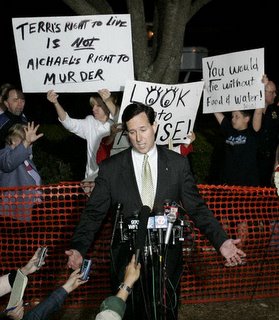 keystone Politics is covering all of Sen. Rick Santorum's problems.

SEN. RICK SANTORUM and his wife received a $500,000, five-year mortgage for their Leesburg, Va., home from a small, private Philadelphia bank run by a major campaign donor - even though its stated policy is to make loans only to its "affluent" investors, which the senator is not.
Good-government experts said the mortgage from The Philadelphia Trust Co. raises serious questions about Santorum's conduct at a time when he is the Senate GOP's point man on ethics reform. They said it would be a violation of the Senate's ethics rules if Santorum received something a regular citizen could not get.

He also has some charity that doesn't play by the rules. They collect money but use most of it to cover overhead. From an Allen Sandals press release:

1) Operation Good Neighbor violated Pennsylvania law because it failed to register with the Commonwealth, despite having raised more than $25,000.

2) Although normal charities typically use 75% of charitable funds raised for program-related grants, Operation Good Neighbor Foundation only used 35.9% for that purpose. A surprising 56.5% of funds raised for charitable purposes were used instead to subsidize salaries, fundraising, travel, conference costs, and rent.

3) The Executive Director of the Foundation, Robert G. Bickhart, was paid $50,000 during 2002-03. Bickhart also serves as the Santorum election campaign's finance director.

4) Bickhart's business, Capitol Resource Group a lobbying firm which is self-described as a "government affairs consortium" occupies the same office suite as the Operation Good Neighbor Foundation AND Rick Santorum's campaign office. The address for all three organizations is One Tower Bridge, Suite 1440, West Conshohocken.
Posted by Gort at 8:31 PM