Some advice for Don Sherwood 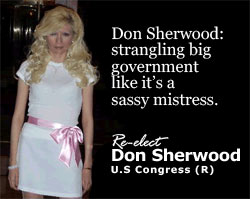 The General sent a letter to our local Congressman. Many thanks to all who pointed this out.

I understand that you're having a little trouble raising money from individual donors. My guess is that they may be afraid that you might break into their homes and strangle them. We need to turn that around.

One of the things I've learned from watching Karl Rove's campaigns is that you have to turn your weaknesses into strengths while doing the opposite to your opponent. An example of this kind of transformation occurred in 2004, when Mr. Rove remade Our Leader, an AWOL draft avoider, into a war hero and his opponent, a decorated Vietnam veteran, into a coward.

You need to do the same kind of thing by turning your penchant for strangling into a selling point. Perhaps you could run ads with tag lines like "Don Sherwood will strangle big government like it's a sassy mistress' or "Don Sherwood believes in family values, so much so that he's willing to strangle his mistress in their defense."

If that doesn't work, you might consider playing on a redemption theme with something like, "Don Sherwood: he hasn't strangled anyone in over sixteen months," or "Don Sherwood: he doesn't strangle people anymore." It's a powerful theme. Our Leader continues to use it effectively with his many "I no longer drink; I just fall down a lot" statements. Please give it a try. I'm sure you'll see some movement in your fundraising.

Anonymous said...
This comment has been removed by a blog administrator.
11:46 AM

Funniest thing I have seen on your site!

Im actually baffled by the politicians who have whores on the side that are ugly. At least get a hot yong blonde or something....not this trash or Lewinski.

those last comments are real mature.