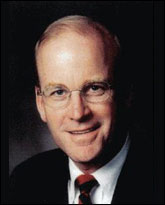 HARRISBURG - Receiving no objection from Gov. Rendell, former U.S. Rep. Joseph Hoeffel said yesterday he would move ahead with his planned campaign for lieutenant governor. Hoeffel said Rendell, in a private meeting on Wednesday, made no attempt to dissuade him from taking on Lt. Gov. Catherine Baker Knoll in the Democratic primary.
He said he would not run over "the governor's active objections."

Hoeffel's entrance into the lieutenant governor's race would make it a four-way primary. Valerie McDonald Roberts, Allegheny County's recorder of deeds, and Harrisburg activist Gene Stilp also seek the office. They are taking on the incumbent Catherine Baker Knoll who has been involved in various controversies recently.
Posted by Gort at 2:41 PM

The question is does cDonal hurt Knoll becuase she is from the west or does she hurt Hoffel becuase she can take away clack voters in Philly
I think Knoll wins becuase the turnout will be low considering there is statewide primary. the only somewhat exciting Democratic priamry i can thnk of is the one for hart's seat and that help's Knoll

actually bill, there is a state senate race in chesco/montco to replace Thompson. If the right candidates run, it could yield a high, isolated turn out in the SE.