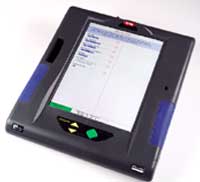 WILKES-BARRE-On Monday Commonwealth Court ruled that the state Constitution requires a referendum before voting methods are changed, according to Charles A. Pascal Jr., the attorney representing the plaintiffs in the case, 11 Westmoreland County residents.

A state Supreme Court decision upholding that of the lower court could complicate Luzerne County’s receipt of the $3 million in federal funding for the machines. A required referendum could delay the institution of the voting terminals, and the county could miss the May deadline built into the federal law.

This may complicate Luzerne County's switch to electronic voting machines or it may get thrown out on appeal. Over at GrasrootsPA one of my favorite analyst has this to say:

"The Times, Places and Manner of holding Elections for Senators and Representatives, shall be prescribed in each State by the Legislature thereof; but the Congress may at any time by Law make or alter such Regulations, except as to the Places of chusing Senators."- Article I, Section 4 of the US Constitution

I've not examined the legal argument, but it appears that through the application of the Supremacy Clause, valid Federal Statute (The help America Vote Act) would trump the state constitution and state statute with respect to the 2006 Congressional / Senatorial elections.

Err, if there is a referendum, what machines will we vote on? I thought the old green monsters were already off to museums and scrapyards.

I thought it was mandatory for the whole state to go electronic?