Gort42 Special Correspondent Austin Smith Ford attended the South Valley Chamber of Commerce forum with the 3 Democratic hopefuls and the lone Republican for the 119th State Representative seat being vacated by John Yudichak. I hit a technical glitch trying to post the graphics but will update when that problem is resolved.


The Democratic and Republican candidates for the 119th faced off in a debate at LCCC on May 10th. It was hosted by the South Valley Chamber of Commerce. For the Dems, this was their second time going at it and it was the first one featuring Rick Arnold the Republican from Mt. Top. Brian Bergman, the Libertarian was not invited to participate.


Gerald Mullery and Gary Zingaretti both came out in favor our states current regressive tax structure. It wasn’t a big surprise. Mullery had signed Tea Party type of pledge of his support for the kind of “fiscal conservatism” that has led us into debt on both the state and federal levels. I hadn’t enjoyed Zingaretti’s responses on the subject in the first debate either, but tonight he tried to claim that ending our regressive system would cost poor people more money. His logic is that the federal earned income tax is progressive and that tax costs more than our current state income tax, therefore all progressive tax costs more. This is such a fallacy I think Glenn Beck would have an ethical problem repeating it.


Rich people spend a much lower percentage of their income on things that the property or sales tax applies to. So let us pause for a graphical representation of the realities of regressive taxes in all states: 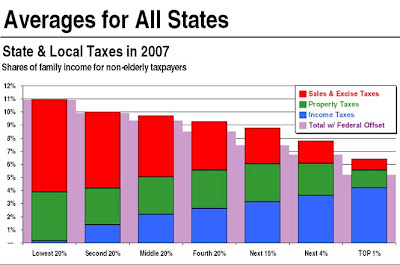 To make this even worse we do not have progressive income tax like the blue part represents. So go ahead and compare how much their income the bottom 20% of earners are spending on sales and property, to the same number for the top 1% of earners. In fact PA is one of the ten most regressive states in the nation!

So I am voting for Bob Morgan who is willing to fight this crap. I don’t know if many politicians on this level grasp this concept. If there is a logical reason for maintaining this ridiculously unfair structure I would love to hear it.

I did like Zingaretti’s efforts and positions in local government. It sounds like he has greatly improved transparency. He supports separating the legislative and executive powers for our counties and ending their forced dependence on property tax. But none of this really matters if we continue to charge the cost of government to those least benefited by society.

Some other awesomely nonsensical positions from Mullery included hits like: the reason NEPA’s economy is failing is because our laborers lack the work ethic of their fathers and grandfathers, also that he doesn’t see a health care crisis. Then they discussed our area’s brain drain. Which is a term used to describe the effect of college grads going elsewhere for jobs. My question is how are these people finding gainful employment elsewhere if they are lazy?

I spoke with a woman afterwards who asked Mullery if he thought our mothers and grandmothers had any work ethics. She didn’t mention his response but the textile industry was once huge in our area and had a reputation of being intense, sweatshop like work. Our female ancestors deserve admiration too.

As far as Mullery not seeing a health care crisis, I can’t really fault him there. Sure 2.8 million Pennsylvanians will be without care at some point this year, but he didn’t say there wasn’t a crisis, he said he didn’t see one. Since it is unlikely that any of those unfortunate people are in his immediate family, he is probably correct.

Actually I’ve found the graph for just PA’s taxes but I thought I would leave the stuff above because this way you can compare it easily to the rest of the states, and also because I am lacking in work ethic. 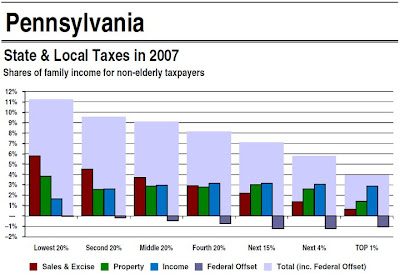 
Mullery said he is "adamantly opposed" to a graduated income tax, allowing counties and school districts to impose sales taxes and earned income taxes, and would sign a document saying he opposes every and all efforts to raise taxes....A topic that "nobody wants to talk about," but which had been brought up previously by three heads of Luzerne County chambers of commerce is the need to instill a work ethic in the younger generation, Mullery said. "We're living off the reputation of our fathers and grandfathers when it comes to the work ethic," he said.

“If you are a person who is struggling, a great deal of the burden comes to you in personal income tax and property tax. We need to find ways to fix that,” Morgan said....“We were promised great property tax relief by our legislators and our governor. They haven’t delivered,” Mullery said.

Gerald Mullery snagged the endorsement of the Times-Leader who said

One of three Democrats vying for this seat, Mullery seems to sense average residents’ daily financial struggles, as well as the state’s looming budget fiasco, and vows to dig in his heels to contain government spending. He has signed a Taxpayer Protection Pledge, signaling his intent to vote against any proposed tax increase.

Bob Morgan claims to be the only real Democrat in the race.


MORGAN EMERGES FROM DEBATE 119th REPRESENTATIVE RACE FRONT RUNNER
Morgan took on attacks from all 3 opponents and comes out winner and candidate to beat.


Monday night in the 119th District State Representative Debate sponsored by the South Valley Chamber of Commerce and the Newport Township Community Organization at Luzerne County Community College in Nanticoke, a leader in the race emerged, Bob Morgan, as the clear front runner for the House seat.

During the debate Morgan took attacks from all three opponents, Gerald Mullery, Gary Zingaretti, and Rick Arnold, vying for the District Seat and despite Republican Rick Arnold attempts to group the 4 candidates into one group Morgan came out the man to beat. Morgan showed the fortitude of an experienced State Legislator by standing up for himself, his ideas, and most importantly the people of the 119th District.

When asked about the work force in the region, Gerald Mullery called the people of the region lazy, saying their work ethic was not like their parents or grandparents and were simply living off their reputation of being hard workers. Morgan stood up for the working families, offended by the insult to their work ethic saying “our students are able to achieve success all over the country, which is a credit to our talent, educational system, and our work ethic.” Morgan reinforced his commitment to in the people in the 119th District by promising to fight for jobs, and education when elected.

Mullery also said that he did not see a Health Care crisis in America, yet even the registered Republican in the race, Rick Arnold, saw a need for health care reform. Morgan, again, stood up for working families in the debate by supporting Adult Basic Care, and the CHIP (Children Health Insurance Program). In his closing Mullery calmed to be a “new Democrat,” yet his policies and ideas “look like an old recycled of Republican ideas,” said Morgan.

One candidate has consistently provided ideas to meet the challenges that we are facing in the region by finding realistic ways to enact solutions and investing in the rebirth of Main Street, not simply offering empty slogans or simplistic pledges on the back of campaign literature. That candidate is Bob Morgan.


But only Zingaretti has government experience, having served as a township supervisor for the past three years. That experience, plus his efforts to make township government more transparent through a website that includes officials’ salaries, meeting minutes and information on securing documents under the state Open Records Law gives him the slight edge in this race.

You owe it to your audience to require guest writers to provide some biographical information about themselves. I think this is important. We need to know where these guest writers are coming from? Who is Austin? How old is he? What is his education level? What does he do for a living? I only ask because it appears he does not have a grasp on reality. I would wager he is young, white, maybe tood a few classes at LCCC, has no job and lives with his mommy and daddy.

How about you do the same Anonymous tipster

Well anon, I've been commenting and posting on this blog for 4 years. So regular readers know a few things about me.

They also know I am always happy to provide more info on myself, it is one of my favorite topics after all. It also helps me draw a clear distinction between my attitude and those of people too scared to even stand behind their personal attacks by attaching their name to them.

Say, what do you know about Gort himself? Or the other guest bloggers, or the people who write the articles for the TL and CV? If you can't stomach a short guest post on a blog, you must have the life stories of all the local MSM peeps. Right?

But congrats you are a brilliant analyst to come so close on those things that describe me, unless of course you know how to use Google and guessed that I wasn't the Austin Smith-Ford who is a surfer in Florida. Nice kid BTW.

I am young, 25 and white. I've taken a few classes at LCCC, I actually picked up 63 credits in less than a year. I do live with my father in Mt. Top. I also enjoy long walks on the beach and my favorite color is blue like the sky.

Now that we are done with personals do you have any basis for your claim that I have no grasp on reality?

Is ITEP and the CTJ making this shit up? O please tell me this was all a dream and I am going to wake up in a world where all voters demand fairness not catchy slogans.

It is kind of funny that an anonymous poster wants biographical information on the blogger in order...I guess...to gauge credibility.

Got to love the Internet.

why should rich people pay a higher precentage. they are already paying more money... fucking class warfare jealous wussy fucks who never had the balls to take a chance and make it in the world ....

They should pay more because they have more. Anon 7:55 if you were to actually read the chart in the article you'd see that the poor do pay too much and that burden could be shifted to the rich.

Now go back to your cigars and brandy.

^ No idea what you're talking about.