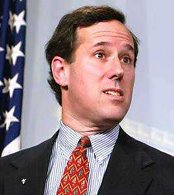 A friend pointed this out on Capitol Buzz today:

Santorums Park In A Handicapped Spot?

I'm not jumping to conclusions as his wife may very well have a handicap parking permit due to her back problems. As pointed out in this ABC story she had a rough time after being over manipulated by a chiropractor. But she sued the Doctor and got a nice award despite her husband's opposition to such awards:

Sen. Rick Santorum, R-Pa., says that the No. 1 health care crisis in his state is medical lawsuit abuse and in the past he's called for a $250,000 cap on non-economic damage awards or awards for pain and suffering. "We need to do something now to fix the medical liability problem in this country," he declared at a rally in Washington D.C., this past spring.

But Santorum's wife sued a doctor for $500,000 in 1999. She claimed that a botched spinal manipulation by her chiropractor led to back surgery, pain and suffering, and sued for twice the amount of a cap Santorum has supported.

But the fact is that Santorum has sponsored or co-sponsored a $250,000 cap on non-economic damages two times Â— even though he testified in his wife's case against the doctor.

But Santorum agreed enough to tell the jury that he had to carry the laundry upstairs for his wife and that, because she suffered humiliation from weight gain, she no longer had the confidence to help him on the campaign trail. The jury was so moved it voted to award Karen Santorum $350,000.

"That's where again you're misled is that a lot of, there was cumulative damages,""he said. "The medical bills, lost income, all those other things that were out there."

Those medical bills totaled $18,800, yet she sued for $500,000. And lost income? The judge made no mention of that when he slashed the jury's award in half, saying it was excessive.

Lost income? Last I heard she stays home to school their kids. And they live in Leesburg, Virginia and bill the Penn Hills , PA school district for the cost. From the AP:

HARRISBURG -- The dispute over tuition that the Penn Hills School District paid for the children of U.S. Sen. Rick Santorum, R-Pa., to be educated via computer at their Virginia home has revealed a basic flaw in Pennsylvania's 2002 cyberschool law. The district paid more than $100,000 for the three years that Santorum's five school-age children attended the Pennsylvania Cyber Charter School, headquartered in Midland.

The Penn Hills school board contends it should not have had to pay the Santorum children's tuition because the family actually lives in Virginia, even though the senator and his wife also own a house in the district.
The Pennsylvania Republican's children had been enrolled in the school since the 2001-02 school year.
In November, amid publicity about a school board member's criticism of the arrangement, Santorum agreed to withdraw his children from the cyberschool and resume homeschooling them.

Neither the cyberschool nor the senator has offered to reimburse the school district, and Santorum has said he did nothing wrong. Penn Hills school board member Erin Vecchio said Santorum has never lived in the district, despite owning a two-bedroom house that was assessed at $106,000 last year. His nearly four-acre property in Leesburg, Va., was assessed at $757,000 this year, according to tax records.

If he wants to live in Virginia and home school his kids that's his business but don't bill the people of Pennsylvania for the privilege. And if you want caps on lawsuits, practice what you preach. He has pulled off quite the feat, giving the appearance of being both a hypocrite and a crook.
Posted by Gort at 8:12 PM

I mean, the depths that this guy will go to in order to screw his constituency AND the American people, all the while making it appear he's championing their pocketbooks...

I love that he has a hoard of children and a two bedroom house. It must be a regular Walton's at night. Night Ricky, night Claude, Night John Boy...

But his wife and kids are off limits according to his public statements.

God, I pray every day that this clown goes down in November!

It is a long known fact that his children aren't educated in the district he lives. They do, however, have a residency there. It's a good argument. By permanent address, though, they are within their rights.

yeah, b/c a two bedroom house is a permanent residence for a family of more than six. Come on Doc. This isn't the 1800's any more and St. Torum isn't a farmer.

to clear things up aboutr Karen She is an author, nurse, and lawyer

and the lawsuit would fit in most caps proposed, the 500,000 econimic and non economic damages, it was most liley lowered becuase courts bring in math people to figure out the exact amount