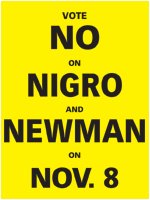 Lot's of reasons to vote no on these two.

-Second, the pay raise furor. Sure they voted to repeal it but some technicality still might give it to the judges. We can't vote against the legislature so let's vote no on these 2 and send them a message.

-Third is there expense account spending. Nigro likes $400 dollar dinners and Newman charges back nickel and dime stuff as outlined in this Daily News article.

-Fourth is why do we elect judges? The Court of Common Pleas is the one that people who turn to legal system encounter so that should be an elective position. But the judges on the the Superior and Supreme court's? They are elected in pointless statewide elections were the candidates can't answer any questions about the issues of the day so we usually get bio ads that tell us how tough on criminals they have been and end by saying they will lock up all the drug dealers.

Anyone with an interest in this subject, and I you are out there, is welcome to comment
Posted by Gort at 3:53 PM

You raise some interesting points, especially about the "pointless campaigns" would you prefer the governor nominate judges with senate vetting?

Danny, I didn't even go into the way these campaigns are financed. They take money from lawyers that will appear before them. The whole system is asking for corruption.

Yes, I think the federal model would be better and it works. Whatever you think of John Roberts and Alito they are qualified and deserve a hearing.

I voted no for all the judges myself.

I can't wait for next November.
I would vote for a catatonic, crackhead, crossdressing chipmunk before before I cast a vote for an incumbent.
Ok, that was overboard, but just wanted to make a point. I only hope this is the beginning to much bigger things.
I suspect it is. This just feeds the fire of the public disgust.
Repeal or no repeal, Some people in Harrisburg are going to find that they are going to have to actually work for a living soon.

Nice site BTW, I ran across it googling "russell nigro".