Never Underestimate The Power Of Makeup 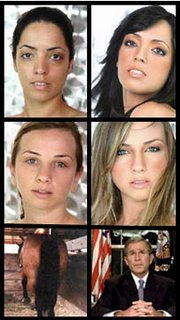 This picture is on Blondesense , thanks to Simply Left Behind for pointing it out.


A comment from a fellow blogger got me thinking, Danny who writes hints, allegations and things left unsaid had this analysis:

I think that the republican party is falling apart, however, the democrats have no rally point or over-arching leader to point the way. I admire some of the things Harry Reid has done thus far in his leadership tenure, however I think we need a top-down leadership structure with a big, bad bully pulpit at the top.

Danny, we will get that when we get to the Presidential race. I may be wrong but from what I have been seeing the Dem's are coming together and staying on message. Senator Reid is a very effective leader and is driving the Republicans nuts. He knows the rules of the Senate and is using them to make a statement. Governor Dean is stirring up the grassroots and the Republicans continually attacking him is taking the heat off the Democratic candidates. Let him be the lightning rod, he enjoys it. The issues in 2006 will be Iraq, corruption, the budget and the failure to look out for ordinary Americans. It is finally getting through, the GOP has sold its soul to big business and people who want to impose their religion on the rest of us.
Posted by Gort at 6:47 PM

True. After I posted that, I got a nice letter from Harry Reid asking me to send money to Bobby Casey. This is certainly no new tactic, but the content of the mailer was personal, professional, and didn't feel dirty like a direct mail piece. Kudos to the DSCC for hitting the nail on the head.

The Dems have cometogether on their message - TRUE.

The problem is that the American people hear it and DONT like it.

It's easy to simply say "Kerry wasnt the right guy" or "we didn't get our message out" then it is to realize "NO ONE SUPPORTS WHAT WE STAND FOR!"

Americans can see clearly through the front of democrat politics right to the socialist hammer at the core.

The rise in liberalism following FDR and the New Deal came about as a result of many impoverished Americans and an economy stagnant. The rapid rise wwas quickly halted circa the Reagan presidency.

The conservative movement has a message more consistent with the majority of Americans values, beleifs, and interests in mind.

That's why they control all branches of government, won the Presidency by the largest count in HISTORY, and why the liberals are so adamently clinging to their only source of indoctrination left: the Supreme Court.

In the arena of ideas, the conservatives see light at the end of the tunnel and will inevitable conquer liberalism. The liberals are trying their last min. rally.

Unfortunatly for them, their led by Dean, Hillary, Gore, Kerry, Teddy, Reed, Reid, Schumer, and Durbin.

That's also why they're on the way out. So I guess your right: they are coming together on their message. That will only HELP conservatives. The best game plan they have is what's transpiring right now: criticize Bush over and over until it's engrained in your psyche. It may be working indicated by low poll numbers. If they want to win elections, it will be a result of republican errors or corruption (the American people will NOT tolerate it). The Democrats will NOT win on ideas.

Fact is that many of the ideas of the Democratic party remain with us today; the most popular being SOcial Security--King George tried raping it--but the public will have none of that. We can talk about an entire list of things such as Medicare--which, unfortunately the King did manage to play around with, etc. What the Doc doesn't understand is that Liberalism is such a part of everyday American life that it would be impossible to live without it. How many neo con college students over the years have gone to school with the help of grants/loans that were made possible by liberals? How many Hurricane {sorry neo cons} victims who preached "pull yourself up" conservative values plead for Uncle Sam's help after the big storm? When the storm hits us all in one way or another, we want and deserve help--if we can bail out the Iraqis with liberalism by pumping billions into their infrastructure while ours deteriorates, we most certainly can do it for our own. Remember, a recession is when your neighbor loses his job--a depression is when you lose yours--and a recovery is when the Republicans in congress lose theirs!

Liberals are on their way out! Holy cow! Somebody forgot to tell the good folks down here in the Lehigh Valley and in the 5 counties surrounding Philadelphia. The LV was a huge win for the Dems this time around, with both county exec positions went D (Lehigh County was 2:1 D overn an incumbent GOP candidate) and the seats open for election on county council went to a majority D. Allentown city council, for the first time in my life, went entirely D... that's right, no GOP candidate won. The D candidate won with more than 60% of the vote over the GOP's golden boy.

I'm sorry, but these candidates went out there and preached liberal values of equality, opportunity and progress. The results were huge and most analysts, myself included, expected a split on these races. I mention the LV not only b/c it's my stomping ground, but b/c it's the bell weather of our state and often teh country. Track state returns over the past 10 years and the LV mirrors it exactly. When the LV starts going D the way it did last week, there is a sentiment out there that needs to be recognized.

Oh Gort, thanks for the kind words listed below in the redistricting article. You run a good site and I'll be back more often.

LV thanks for coming by and I appreciate the input of someone who knows what they are talking about. I'm a regular reader of http://www.keystonepolitics.com/. It's one of my first stops in the AM. We have had a few exchanges at Grassroots and sometimes I feel like we are the house Dem's over there. But they always treat us well as they are busy ripping into each other. Or as Rodney said "now I know why tigers eat their young."