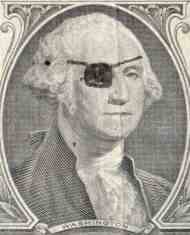 After all pay raise furor in Pennsylvania now comes news that the Congress is playing games with their pay raise by voting against it but taking it anyway. In October the Senate voted against taking the annual cost of living adjustment as reported in the Boston Globe:

WASHINGTON --Senators on Tuesday agreed to give up their annual pay raise, saying they need to do their part to save the government a little money in light of the huge expenses from Hurricane Katrina and the growing budget deficit.

Congress is looking for ways to rein in spending, said Sen. Jon Kyl, who sponsored the pay freeze proposal. "It's hard to argue that this process shouldn't include our own salaries." It passed 92-6.

That was last month. Last week, according to Roll Call, lawmakers saw their pay raise may a startling comeback.
Friday's passage of the $65.9 billion Transportation, Treasury, Housing and Urban Development conference report included a provision that earmarked some $2 million for Members' annual pay hike.

The cost of Katrina and the other hurricaines, the war in Iraq, more tax cuts for people who don't need it, exploding deficits and these guys want a raise. They have so mismanaged the country's finances that we all will be paying for it for a long time and they want a raise!

No one is asked to sacrifice, everything is free. The government can't pay it's bills without borrowing a bunch of money. No one is asked to pay more tax to support the ever expanding needs/obligations/choices of the national government. We are at war and our leaders do not ask for volunteers for our military or propose a draft to share the burden. The biggest threat to our security is our dependence on foreign oil but proposals to to reduce our addiction to the stuff are ignored. Laws like the Patriot Act are passed in the heat of the moment and the flaws in them are defended as being necessary. United States citizens are held for three years without access to the courts or being charged with a crime and that's alright. Read the Declaration of Independence, one of the grievances was actions like this.

Not only don't these people deserve a raise, I think we should fire them all.

I wish they could come together so quickly on important issues like bringing the troops home, like they do for their salaries. The patriot act is part communism, the last I checked we were a free democratic union with laws protecting us from people or governments. That's what I think.