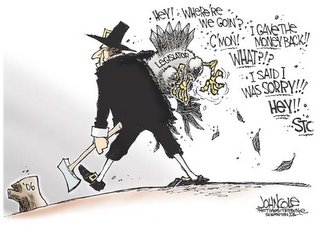 Will there be a price to paid by our local legislators over the pay grab debacle? Probably not. Despite a recent poll showing widespread dissatifaction with Harrisburg and 6 in 10 saying they are less likely to vote for their local yokel if they voted for the pay raise no serious opposition has emerged to any of our local Represenatives. In Luzerne County and NEPA if you get elected the first time you will probably be there for life. Shall I go down the list; Dan Flood, Marty Murray, Paul Kanjorski, Charlie Lemmond, Bob Mellow, Joe McDade, Ray Musto, George Hasay, etc. etc.....

If there was ever a time for a civic minded person who has considered running for office this is it. When you look at the the performance of the state and national governments it's there is an opening for someone to take advantage of the throw the bums out sentiment out there. I think this is a great opportunity for Joe Leonardi who is seeking the Republican nomination in the 11th Congressional district and Chris Carney the Democrat who may knock off Don Sherwood in the 10th.

Back to the state house and the lack of candidates locally. The only Luzerne County lawmaker that did not vote for the payraise was John Yudichak (D-Nanticoke) or Yuddy as my blog buddy Bill Fitz likes to call him. I haven't heard any noise about taking on any of them except for the usual suspects that may take on Kevin Blaum. I like Kevin and think he has done a very good job. I remember when he was a teacher at Bishop Hoban High School and was elected to the W-B city council. Then he beat long time state rep Bernie O'Brien and we have been sending him back ever since. My fondest memory of him is the 1976 presidential campaign when we both worked for Jimmy Carter, my first political experience. He voted for the pay raise and deserves opposition but no serious candidate has come forward. According to the local papers Stephen Urban is considering another run. The last time he ran against Kevin he got clobbered but ran such a good campaign that Blaum even complented him. The other potential candidate is Christine Katsock who ran last time. If my memory is right she has run for state rep, council, W-B mayor and school director. She is becoming Wilkes-Barre's version of Harold Stassen
Posted by Gort at 2:18 PM

This Stassen guy actually had power and won an election