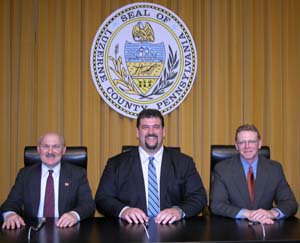 Are you ready for the Viagra Courthouse Tower or the Depends Public Restroom. Instead of Moon Lake Park lets call it the Exxon Valdez Wildlife Sanctuary. Why stop with buildings why not rename the river the Pennsylvania American Waterway and I'm sure many roads and streets can be auctioned off to lawfirms that make their money by chasing ambulances after auto accidents. We have many culm banks that can use a better name than big ugly black things. How about tattooing Goldenpalace.com on Skrep's forehead. I think most politicians should be sponsored by e-bay because they go to the highest bidder.

Luzerne County commissioners want to cover some of the projected $9.4 million deficit for 2006 by selling ad space, billboards and naming rights on county property. Recreation is one area where naming rights and advertising can be fruitful and well-received by the public, said Mike Nadol of Philadelphia-based Public Financial Management, which helped the county come up with the idea. Companies might relish the chance to name stretches of the Wyoming Valley Levee Trail or place ads at the riverfront amphitheater and marina to be built along the Susquehanna River in Wilkes-Barre. Billboards or signs on high-traffic county-owned property might bring in some bucks too, Vonderheid said. On a smaller scale, ads could be put on kiosks or benches in and around county buildings.

We live in a time when somebody is always trying to sell you something. I know the county, like many local governments, is strapped for cash but enough already. Do you really want more billboards? And ads in parks? I go to a park to get away from TV, radio and advertising. I provided a few ideas on naming rights, does anyone have more?

Officer Smith aresst the drug dealer and puts him in the number 7 Tide Car.
THen the miranda Rights, you have to right ..... an attorney, And I recomend Attorney Stevey Stev, The Defense attornyes sponser different crimes. So one gets pluged for DUIs and another for Murder.
Its two fold becuase it raSES REVENUE BUT ALSO THE COUNTY SOME MONEY BECUASE WITH THE ATTORNYE SPONSER IT MAY CAUSE FEW LESS PEOPLE TO GO TO THE PUBLIC dEFENDER.