The Lions in Winter 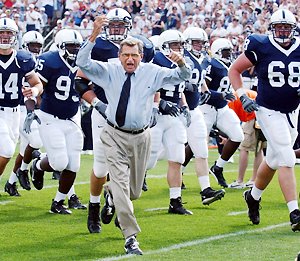 Enough of politics and other minor matters the big news is Penn State is going to the Orange Bowl. After a few down seasons PSU came roaring back this year to go 10-1. They started shaky and had thrilling wins at Northwestern and against Ohio State at home. The only blemish was a last second (if there was a second left) loss in the big house. They blew away the rest of the schedule with the defense leading the way and the offense doing it's part unlike last year. Remember the Iowa game? How do you lose a football game 6-4? But all is forgotten and the focus is on the 2 coaches who have won more games than any others. As usual Joe Pa plays down the hype:

"I think we just ought to forget about the Bobby Bowden-Joe Paterno relationship," Paterno said. "I think we ought to be looking at two good football teams that are going to go down there and have a chance to knock each other's brains out."

Yeah right. In college football it's all about school loyalty, where you live and especially the coaches. The players come and go but until recently the Head Coaches were the one thing that stayed the same. In Happy Valley and Tallahassee you know who the coach is going to be next year. They both have over 300 wins and have faced each other seven times with Paterno winning six of the meetings. The class acts that they are you will hear each of them praise the other team over the next few weeks and discount the chances of their own squads. Expect a good one.

As far as that other game goes I think we are in for a good one but Texas just has too much for USC.
Posted by Gort at 4:24 PM