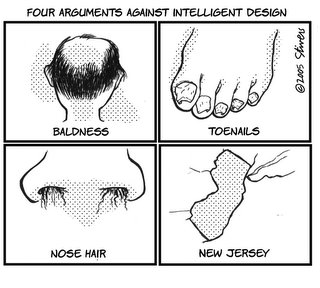 The citizens of the Dover area were poorly served by the members of the Board who voted for the ID Policy. It is ironic that several of these individuals, who so staunchly and proudly touted their religious convictions in public, would time and again lie to cover their tracks and disguise the real purpose behind the ID Policy.-U.S. District Judge John E. Jones

Yahoo News: A federal judge dealt a major setback Tuesday to backers of the idea that some forms of life are so complex that they must be the product of an intelligent designer. Judge John Jones ruled that it is unconstitutional to teach the concept in public school science classes because it is :a religious view. The case, the first court test of intelligent design, or ID, was the latest in a series of challenges to evolution that go back to the 1925 Scopes trial, when a Tennessee high school science teacher was convicted of teaching Darwin's theory that humans and apes evolved from a common ancestor.

Just because a judge ruled it is religion and not science will not deter some people. From the CV:

Northwest Area School District has no plans to add intelligent design to its science classes, after a federal ruling Tuesday banned the theory from biology classes in Dover, PA. School board member Randy Tomasacci, who has been advocating a discussion of intelligent design's place in the curriculum since February, said members of the board "came to an understanding" last month that intelligent design wasn't appropriate for a science curriculum.
Still, Tomasacci isn't entirely giving up on the theory, which U.S. District Judge John E. Jones III called "a mere re-labeling of creationism" in his decision. The board member has received support from district residents and he wants to encourage "a healthy exchange of ideas."Intelligent design might be destined for a Northwest social science course, or as a topic of discussion in current events. The board will discuss the theory"s future at a January curriculum board meeting to see "how to teach it where," Tomasacci said.

Tomasacci seemed glad another district had tested the issue in the courts. The Northwest board has no desire to get locked up in litigation, he said.

Maybe he should read the whole opinion. Especially this part:

The students, parents, and teachers of the Dover Area School District deserved better than to be dragged into this legal maelstrom, with its resulting utter waste of monetary and personal resources.