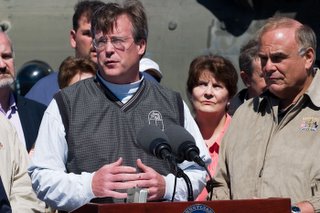 If any of the rumors that are flying around are true we may be seeing more of these two together. LVDem ran this by me on Friday:

Doherty approached to run against CBK in primary for Lieutenant Governor

"Sources close to Scranton Mayor Chris Doherty say that aides to Governor Ed Rendell have approached him about running for Lieutenant Governor in 2006. Supposedly, Rendell wants Doherty but (obviously) needs to keep a distance."

Then I spotted this letter in the CV today:

I have heard some rumblings among my friends and associates in the progressive community about Mayor Chris Doherty from Scranton, Pennsylvania. Mayor Doherty is the 47-year-old mayor of Scranton, fresh off a big second-term election victory. Mayor Doherty seems to possess a genuine passion for public service. Over the past four years, he has done wonderful things for Scranton and Northeastern Pennsylvania, and I, for one, am confident that a young and energetic leader like Mayor Doherty would be a perfect addition to the Lieutenant Governor's race. Here's to a "draft Doherty" movement that will excite progressive voters across the state who are looking for a new generation of leadership in our Commonwealth.

Wishful thinking or an organized campaign? The Democratic field may become as crowded the Republican side if this is true. Valerie McDonald Roberts, Allegheny County's recorder of deeds, has announced her candidacy to replace to Lt. Gov. Catherine Baker Knoll, a fellow Democrat also from Allegheny County. And there is talk of Barbara Hafer or Joe Hoeffel may get into this. I think Hafer has denied any interest but Hoeffel told the Daily News:

"I'm thinking about it, which is about all I can say," said Hoeffel from his Philadelphia law office. "I'm talking to some friends and thinking about the possibilities."

Maybe all this speculation is a way to get Knoll to step aside because I can't imagine that any serious Democrat would enter this race without Rendell's blessing. Many view her as a possible liability for the ticket because of her well publicized problems with funerals, parrots and knowing the Governor's name.
Posted by Gort at 11:22 AM

Doherty would be a good choice, Hoffel is a horrible candiate and is alredy from philly.
Picking Doherty basically means abanonding the West and ceding it to Swann, Who Will get the GOP Nod.
All key GOP figures outside of PA are all about Swann so basically look for COngressmen in the Southest, Fitz, Gerlach who both will woin but will want national money for thier races will support Swann in the primary. I have not talked to anyone outside of PA who even cares aboput Bill Scranton, they are excited about Swann wjo is teaming up with Chris MAtthews Brother and Scranon is teaming up with a Nive Rep from the West.

Bill, not denying your logic or anything b/c I know the state GOP is an insiders game, but the voters choose the nominee.

That is true, I juts like Swann matthews so am going to impose my will on PA, just like both State committees

Greetings from Western PA. I'm not as familiar with Doherty as I'm sure you folks are, though I know of him and that he is considered and up-and-comer statewide. But I have also heard that he is quite socially conservative. Have I heard wrong?

Bill, since you are so open with your intentions, you are excused. The open plotters shall always be exempt from scrutiny.

Lou, I don't know what his positions are on the hot button issues. What I do know is that he is a Mayor who seems to have done a good job cleaning up a mess.

Dohrty would be a Republican if he was in Montgomery county and not mayor of Scranton he was at the Bush Inaguartion with his fellow DINO wilkes-Barre Mayor Tom Leighton
But Doherty is more of a player within the party considering the DEMs controll the luzeren Courthouse and run the Luzeren DEMs while Doherty is the only legit Dem currently holding office in lackawanna, but i think they will get the commishoners office in 07

These crowded fields have yet to be winnowed by the state conventions, so backroom maneuvering by the party elites could still make a lot of difference.

I also think that Roberts isn't being taken as seriously as she should be. She could be a huge asset to Rendell's campaign, ESP if Swann is the GOP nominee.

If Swann is the the nominee, Rendell can spend the fall in Florida and still win. PA (northern Alabama) is not going to elect a black Governor.

Before any of you anoint Chris Doherty for Lt. Governor, maybe you should read www.dohertydeceit.com

This will give you a better idea of what this guy is all about. He currently has Scranton $250 million in debt, and wants to borrow another $43 million in the Fall of 2006. This guy is a complete loser in my opinion.

DohertyDeceit.com is referred to here in Scranton as Area 51. Doherty has done a great job. He has been an asset to Scranton. I hope he stays for one more term.

Doherty has completely destroyed the city of Scrantons future,he has loaded the payroll with crony friends and no bid contracts to campaign contributers. if he left Scranton today it would be with a budget that has grown from a 58 million to a 75 million dollar in his 5 years in office and well over 250 million in loans that he as mayor acquired, on top of selling the south side complex and golf course and that money going to cronies, does anyone want this man to run anything in the state, I find this amusing that he is even mentioned for a higher office, his big win to a second term cost him a million dollars in campaign costs and he won by 2,000 votes for a 50,000 a year job, oh yeah that was a huge win, lol.

He is a political leper and Dems would be smart to avoid him, like both New Senator Casey and Rep Chris Carney distanced themselves from him.