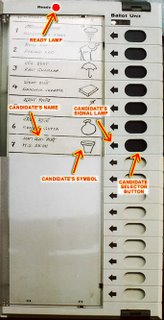 There is a big dustup going on about voting machines and IDs in Pennsylvania. A bill passed the House of Representatives in Harrisburg that would require people to show photo identification before voting and would put tighter restrictions on where voting places can be located. It also would take away the right to vote from people convicted of a felony who are out of prison but on probation or parole. Sounds reasonable until you start to think about it. About half the people eligible vote in a presidential election and in off year elections the numbers are even smaller. Why put up more barriers to voting?I have heard the stories about drinks for votes, cash payments and multiple ballots being cast but I have never seen it. The people who bother to vote should not be hassled. The few criminals who have served their time and want to register to vote should be encouraged as it indicates a desire to be a part of society and keep their nose clean.

More worrying is the mandate to use computerized voting machines. These things make me nervous as anyone who uses a computer knows how vulnerable they are. Sometimes I think our society is technology drunk when we should look at making things simpler. Let's go back to paper ballots for elections. To make the switch our Commissioners will have to borrow yet more money. The problem is not with who votes but with the counting of votes.
Posted by Gort at 4:25 PM

Actually, my mom has been CERTIFYING VOTES for over 17 years and she has never had a problem.

The machines in montco are very good, they are electric, but not computers like the touch screen ones,
and yes the biigest problem is the counters
generally Dems seem more likely to cheat becuase theya re in Cities. I am sure the Philly GOP is much more corupt then the Lancaster County Dems. It is an Urban attitude that is in itself not bad it leads to curroption and acceptance of curroption.
They see chetaing in elections as a form of gamemenship and outwitting your oponnet, not so much as wrong. I would say in almost every stae or county int he nation either both parties are curopt or both are clean. Dirty politivcs breads Dirty politics until thepeople resond, and in PA they may have respomnded witht he pay raise but who knows