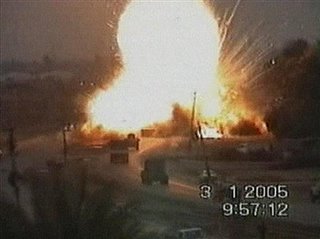 As I pointed out before John Murtha has changed the debate about the war from if the US should get out but to when and how. Recently the Secretary of State and Mr. Bush himself have addressed the subject. He said we will stay there until we achieve victory but has not been able to define what that means.

Now the local media is finally paying attention to the question that is sure to dominate the 2006 congressional elections. From the TL:

During his address at the United States Naval Academy in Maryland, Bush said that in addition to 80 Iraqi police and army battalions assisting American forces, there are 40 battalions operating with little coalition support. Following President Bush's speech, Chris Carney, a Democrat running for Don Sherwood’s 10th Congressional District seat, called for 40 American battalions to be brought home from Iraq. "I'm concerned that it's taken almost two and a half years for the president to tell the country how he plans to win in Iraq," Carney said.
The speech, he said, offered no new information and the strategic document didn't satisfy his questions about the president's plan to battle the insurgency in Iraq.

Don Sherwood, a Republican from Tunkhannock, echoed Bush's rejection of "artificial timetables" from politicians. "My congressional district has been hit hard, and I would love to get our people out of Iraq immediately, but we need to get the out there when the mission is accomplished," Sherwood said. "When we have a stable peaceful Iraq we can bring all our people home or some of our people home."

What does "bring some of our people home" mean? Is the US planning a permanent military presence? History has shown that you can't occupy a country forever when the locals don't want you there.

Also the attacks on John Murtha continue even after Jean Schmidt was roundly criticized for calling him a "coward." The right wing blogs are still going after him personally instead of dealing with the substance of his argument. But that is par for the course in this poisoned atmosphere that people like Rush Windbag helps perpetuate. It's not just the right wing radio blowhards that are to blame as there are plenty of people on the left that are over the top. Speaking of Rush, I was listening to him yesterday when he called Murtha a traitor. Sometimes I don't think he even believes some of what he says but it's good for ratings. Contrast all this rhetoric with what Chris Carney said to the Boston Globe:

"Both parties have pursued policies of division, and there is this gaping whole in the middle where I think most Americans reside," said Carney, who until recently served as an adviser to the deputy defense secretary's office, and who now is vying to unseat four-term Republican Don Sherwood.