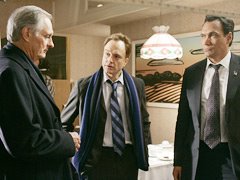 Thanks to the commenter who pointed me to this link to the debate transcript. The highlight was when Senator Vinick kept using the word liberal as a pejorative term and Santos shot back:

Liberals got women the right to vote. Liberals got African-Americans the right to vote. Liberals created Social Security and lifted millions of elderly people out of poverty. Liberals ended segregation. Liberals passed the Civil Rights Act, the Voting Rights Act. Liberals created Medicare. Liberals passed the Clean Air Act, the Clean Water Act. What did Conservatives do? They opposed them on every one of those things – every one. So when you try to hurl that label at my feet, 'Liberal,' as if it were something to be ashamed of, something dirty, something to run away from, it won’t work, Senator, because I will pick up that label and I will wear it as a badge of honor.

Carl liked it so much he put it on the header of Simply Left Behind. The West Wing website poll has Santos winning the debate. It's a shame that no real politician has ever made that defense.

In related TV news WVIA is showing one of my favorite British political satires, Yes Minister on Wednesday at 5:30PM.
Posted by Gort at 5:32 PM

no, the Republican party did all of those things. The GOP is a shell of its formerself on matters of civil rights and helping the poor. The party is more interested in fighting wars and dividing the country with mindless culture wars than in fighting for its former values.

And just to point out, liberals in the GOP ended slavery, founded this nation, fought for the poor and sought to bring attention to the Nazi death camps. Your party used to be the party of the Rockefellers and the Teddy Roosevelts. Don't call Teddy and the late Sen. conservatives, b/c they are anything but.

"Vinick: A Republican President ended slavery
Santos: Yes, a liberal Republican Senator. What happened to them? they got run out of your party. What did liberals do that was so offensive to the liberal party?"

"What did Conservatives do? They opposed them on every one of those things... every one."

I'll admit, the GOP had a large role in all of those points, but don't act as if conservatives supported them, b/c on every one of them, the conservative wings of the Democratic and Republican Parties opposed them. Period. End of story.

Dr. Rick is confusing Republicans with Conservatives; if we go by the Dr.'s logic then he would have to admit that if the ball were in the Conservative court in the months leading to WWII, we would have been at a great disadvantage since the COns were isolationists. Read up on your history, Doc. Sieg Heil!

The abolitionists formed the foundation of a liberal christian sect.