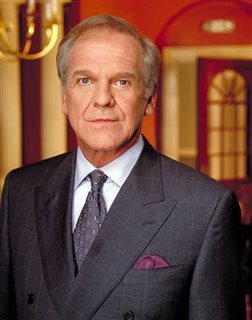 LOS ANGELES - John Spencer, who played a tough and dedicated politico on The West Wing who survived a serious illness to run for vice president, died of a heart attack Friday. He was 58. Spencer died after being admitted to a Los Angeles hospital during the night, said his publicist, Ron Hofmann. He would have been 59 on Tuesday.

Spencer played Leo McGarry, the savvy and powerful chief of staff to President Josiah "Jed" Bartlet (Martin Sheen). In a sad parallel to life, Spencer’s character suffered a heart attack that forced him to give up his White House job. McGarry recovered and was picked as a running mate for Democratic presidential contender Matt Santos, played by Jimmy Smits; the campaign against Republican Arnold Vinick (Alan Alda) has been a central theme for the drama this season.

Many of us are big fans of the West Wing, including this guy. We are going to miss the Leo character and it will be interesting to see how they write this into the show.
Posted by Gort at 11:00 AM