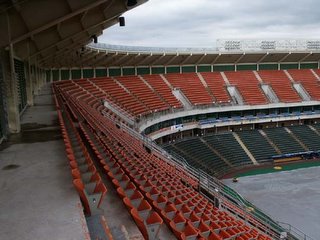 According to the Philadelphia Daily News my baseball team is heading south:

The ride to the major leagues will soon get shorter for top Phillies farm hands. After next season, the Phillies are expected to end their affiliation with Scranton/Wilkes-Barre after nearly 20 years and move into a new Triple A park that has been approved for construction in Allentown and is scheduled to be completed by 2007.

"Nothing is finalized, but after 2006, we probably won't end up with a working agreement with Scranton," said Mike Arbuckle, the Phillies' assistant general manager in charge of player development.

The stadium is assured of a replacement team, probably the Orioles AAA team now located in Ottawa, but if this is true it stinks. I wonder how much the political wrangling between the Lackawanna County Commissioners and the stadium authority has to do with this. I can't blame the Phillies management if they decided that these people are nuts and don't want to do business with them anymore. Commissioners Robert Cordaro and A.J. Munchak should be run out of town if they let this happen without a fight.
Posted by Gort at 8:59 AM

ouch... sorry for your loss but happy for our gain.

Look at the bright side, maybe we could get the Yankees organization in here. There's definately enough bandwagoners in this area.