Who's going to Harrisburg? 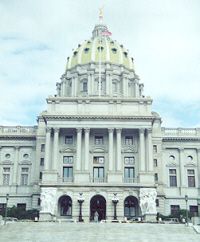 The race to succeed Kevin Blaum, D-Wilkes-Barre, as 121st Legislative District representative is on. Kevin has held this seat for the last 25 years and the next person might be there just as long. Unlike some of our local placeholders, George Hasay comes to mind, he actually did some good for the area. There's alot of speculation and feelers about who is going to run for this seat and this is what I've heard. Wilkes-Barre Attorney Bill Vinsko is the early favorite according to a few elected officials and committee people I have talked to . He has been a good party soldier and has some favors to call in. W-B city councilwomen Kathy Kane won the most votes in the last election and her husband Marty Kane is a fixture in local politics. Bob Reilly has been threatening to run for higher office for a long time. He was a city councilman and Democratic chairman when he got elected to the Clerk of Courts job. A few years back he was talking about taking on Kanjorski. The O'Conner clan has there golden boy in Neil O'Donnell and Marty Murry's grandson might be a candidate.

We have some good races in Luzerne County with 2 open seats. Haggerty is the favorite to win the state senate seat Charlie Lemmond has held for so long and the W-B represenative's spot is anyone's guess.
Posted by Gort at 2:01 PM